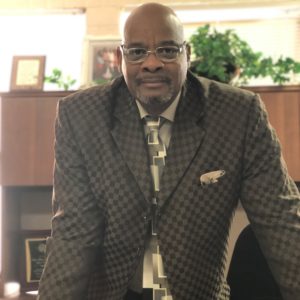 I thank God, whom I serve with a pure conscience, as my forefathers did, as without ceasing I remember you in my prayers night and day,4 greatly desiring to see you, being mindful of your tears, that I may be filled with joy, 5 when I call to remembrance the [a]genuine faith that is in you, which dwelt first in your grandmother Lois and your mother Eunice, and I am persuaded is in you also. 6 Therefore I remind you to stir up the gift of God which is in you through the laying on of my hands. 7 For God has not given us a spirit of fear, but of power and of love and of a sound mind. 2Timothy 1:3-7

“A Journey of A Thousand Miles”

Pastor Michael E. Grady began his journey in ministry at an early age. He was born and raised in St. Louis, Missouri, by Godly parents, and licensed and ordained in 1970 to the Gospel Ministry, while serving faithfully as Associate Minister. His leadership within the church extended throughout the mid-west as he preached the gospel and taught at every level of Leadership. He attended Southern Illinois University, Edwardsville, Illinois, where he studied Human Resources prior to entering active duty.

After graduating from the United States Army Chaplain School, he was assigned to Ft. Bliss, Texas in El Paso, where he met and married his wife Jeneverlyn. They celebrated 42 years of marriage this year!!! The Lord blessed them with three beautiful daughters, Monique Latrice, Michelle Elise, and Jacqulyn Erica Yvette, and one precious granddaughter, Maya Nevaeh. Pastor Grady loves his family and is devoted to empowering them to be a “reflection” of God’s heart.

Pastor Grady retired from the United States Army, while servings as the Reserve Chaplains’ Training Advisor at the U.S. Army Chaplain Center and School, Ft. Monmouth, New Jersey. During his time at Ft. Monmouth, New Jersey, he also graduated from of Monmouth Bible Institute, Farmingdale, New Jersey. Later Pastor Grady continued, while on Active duty to serve as Adjunct Instructor, for students seeking to gain a Degree in Christian Education with an Advanced Degree in New Testament Studies.

He received the Meritorious Service Medal (five oak leaf clusters) and many other awards throughout his military service. He was well prepared to serve and assist Chaplains, Chaplain Assistants and their families in pursuing excellence and balance in service. He went on to retire from active military service in and continued serving as full time Pastor of True Vine Baptist Church, Asbury Park, New Jersey.

At every duty assignment, Pastor Grady was afforded the opportunity to excel and exercise his gifts of “preaching and teaching” wherever he was stationed. He, very early in his military career, found favor both with Senior Chaplains and Senior Chaplains Assistants which further validated “A Divine” calling and appointment on his life.

Upon returning to El Paso, Texas in 2004, Pastor Grady was ordained Elder in the Christian Methodist Episcopal Church. Pastor Grady served on the District and Annual Conference levels of the Ninth Episcopal District of the Christian Methodist Episcopal Church. He also served as Chairman of the Board on Ministerial Examination as well as the Joint Board of Finance. Pastor Grady was again elevated to the Office of Presiding Elder of the New Mexico Region of the Arizona/New Mexico District.

Because of the anointing upon his life, Pastor Grady was afforded opportunities to serve throughout the El Paso Christian communities in many capacities.

From 2005-2010, Pastor Michael E. Grady was installed, and served as the President of the Interdenominational Ministerial Alliance of El Paso, Texas. While serving in this capacity, he was able to convene Pastors and Ministers from throughout the city of El Paso to develop unity and fellowship among all “Christian leaders” in order to gain credibility of our witness throughout the city. His theme as he served as Servant Leader of this great organization is “moving, from good to great!!!”

In 2015, Pastor Michael E. Grady, was once again led by the spirit of the Lord to plant a “community of faith” on the central east of El Paso. The Lord moved to establish the “Prince of Peace Christian Fellowship Church, Inc. which launched on the First Sunday in November 2015. The community stands on four pillars, “faith, family, fitness, and finance.”

The ministry equips and perfects the saints at 2155 Wedgewood Drive, El Paso, Texas 79925. Christian Education, through Bible study as well as Disciple Training are the cornerstones, which God uses to “enlarge the vision and prepare servant leaders, who are not ashamed of the gospel of Christ.”

While serving presently as the Religious Advisor for the NAACP, Pastor Grady continues tirelessly to serve the El Paso community by reaching out to Pastors, Community, and Social leaders to engage and attach them to the “pulse” of the city, through collaboration.

He was elected President of the El Paso Branch (Unit 6175), the oldest branch in the State of Texas. His theme was “A Journey of a Thousand Miles” as he sought to “unite” El Paso into a “common-unity and to address the issues of civil, social, and economic rights for all. Pastor Grady continues to “expose the darkness” that has penetrated the heart of our city as we attempt to speak truth to power.

The most recent events of August 3, 2019 has once again shed the spotlight on the hatred and anger that “Builds Walls’ instead of bridges. Once again the least, lost, left out, and disenfranchised become the focal point of those who “fear” the uniting of a peoples destined to change a generation, longing to be free. From the highest levels of government in the land, hate seems to be the order of the day.

Pastor Michael Grady, often stands as a voice, once again, crying in the wilderness, “Let my people go!”

One of his favorite songs of the civil rights movement is “ain’t gonna let nobody turn me around!” The time is at hand, and “together we can!!!”